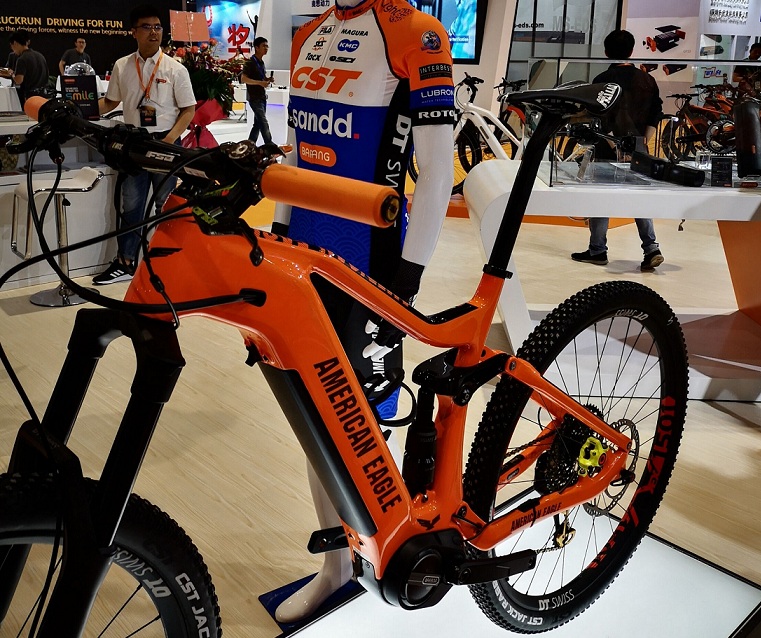 Suzhou, China – Bafang, one of the leading manufacturers of e-mobility components and complete e-drive systems, is at the forefront of development for the latest entry in bicycle racing: the UCI e-MTB World Championships, going to take place in Mont Saint Anne, Canada, in the summer of 2019. For this purpose, the company has teamed up with Dutch MTB brand American Eagle – and with Bart Brentjens, their product manager, formerly known as the world’s first MTB Olympic Champion (Atlanta / USA, 1996). Bart himself is still racing on a high level, which makes him the current “Grand Master” of the sport’s hardest stage race, the Cape Epic, held in South Africa at the beginning of each cross-country season. But his main focus is on his MTB brand American Eagle.

Together with a newly signed development engineer, Bart Brentjens and his team have designed a capable dual-suspension frame that fully integrates the powerful Bafang M500 mid-drive system up to an InTube battery. The M500’s maximum torque (95Nm) and minimum weight (3.0kg) are as well a strong foundation for future racing success as are the carbon frame made for 29” wheels and 100mm of front and rear travel.

“In the major European markets, the e-bike / pedelec segment is growing by 20% or more year-on-year, and the e-MTB is even doubling in some places”, says Jack Brandsen, Europe General Manager for Bafang Electric Motor Science Technology B.V. “On the trade floor, we observe that the e-MTB is replacing the high-priced "organic" mountain bikes. And outside on the trails, whether in the forests near bigger cities or in mountainous landscapes like the Alps, this trend is reflected by the many riders on every fine weather day. The fact that we are working together with Bart Brentjens and his team on a victory-ready E-MTB, which will go to the start of the UCI World Championship next August, is for me the perfect example of a win-win situation. Because here we can demonstrate on a big stage the enormous potential of Bafang in terms of performance and technology.”